Home » Etch A Sketch » Recognizing Andre Cassagnes, the Creator of the Etch A Sketch, after passing away at 86 »

Recognizing Andre Cassagnes, the Creator of the Etch A Sketch, after passing away at 86

Freeze Tag, Inc. takes a moment to recognize Andre Cassagnes, the Creator of the Etch A Sketch, after passing away at 86. His iconic toy has been enjoyed by millions around the world. We wish to thank Andrew for his contribution to the world and wish his family all the best.

The following is taken from TechCrunch: 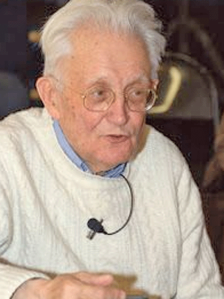 What Andre Cassagnes thought of today’s beeping and whirring playrooms we don’t know. We do know that the former electrician, born on September 23, 1926, created his iconic toy after noticing how graphite clung to a thin film of plastic while he was marking up a light switch decal. He tinkered with the idea for a while and created the L’Ecran Magique in 1959. Ohio Art licensed his idea in 1960 and the red-framed device was born.

The inventor died on January 16th of unknown causes.

The toy went on to great acclaim. Named one of the top 100 toys of the 20th century it played an integral role in many of our lives. Its limitations gave it glory and one shake is all it took to get rid of our transgressions. For many of us it was our first experience in mechanical drawing and what was LOGO but an electronic Etch A Sketch? That we, as pre-digital kids, could put something on a screen was a mesmerizing proposition and that kids still love this toy is a wonder.

The toy played an integral part in the life of Bryan, Ohio residents where, until 2003, the Etch A Sketch was built. The town moved manufacturing to Shenzhen, devastating the employees who brought the Etch A Sketch to life year after year.

“Etch A Sketch has brought much success to the Ohio Art Company, and we will be eternally grateful to Andre for that. His invention brought joy to so many over such a long period of time,” said Ohio Art president Larry Killgallon.

Cassagnes attempted to recreate his success and built a toy with a globe-shaped screen and a car game. Nothing received quite the same acclaim. In his later years took up kite-flying. Some would say it’s sad to be remembered for only one creation but, I would wager, Cassagnes’ gentle, quiet toy is a noble memorial to its creator. In an era of distraction, there is something beautiful about a toy that can create anything you can imagine using two simple dials and a blank screen and something important about a toy that will forgive your mistakes with a few soft shakes.