The free-to-play business model for games was pioneered on the PC platform and has exploded globally on the mobile platform. The free-to-play model allows users to download and play an enjoyable, but limited portion of a game for free. If the user wants to access premium features or special virtual items to increase the fun factor, then the user is required to pay, usually $0.99 per feature or item.

In a just a few years, the free-to-play business model has proven to be a very successful model for mobile games. The revenue potential of a game largely depends on the addictiveness of the game and the game creator’s proprietary techniques for encouraging or forcing the player into make a purchase decision – without overly offending the player. The potential for rapidly spreading the game through social networks and small in-game purchases adds up to a very sizeable business opportunity. One of the top grossing games in 2013 was Candy Crush Saga, a seemingly simple game where a user combines 3 or more color candies on a puzzle board to get points. As of February 2014, Think Gaming estimates that Candy Crush Saga grossed over $771,000 per day, or over $280 million per year, with a life-time user revenue of merely $3.00 from in-game purchases.

Freeze Tag mobile games are based on the free-to-play model. In addition, we believe that games are more fun with friends, so we connect them with major social networks such as Facebook and Twitter to enhance the games’ addictiveness, enjoyment and world-of-mouth referrals. In executing our business model, we employ a proprietary game engine and real-time data analytics to dynamically optimize the gaming experience for revenue generation.

According to a 2013 report from Newzoo, the mobile games market generated $12.3 billion, or 17.4% of all global game revenues. By 2016, mobile games are forecast to account for 27.8% of global game revenues, or $23.9 billion, translating into a compound annual growth rate (CAGR) of 27.3%.  This is almost four times higher than the game industry as a whole, or 6.7%, which includes traditional blockbuster titles such as Grand Theft Auto, Call of Duty and Super Mario. 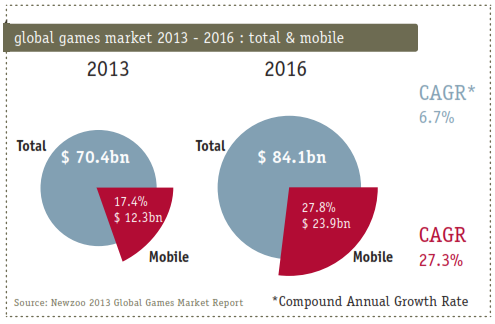 According to Newzoo, there are 5 key reasons why the mobile game segment has and will continue to experience impressive growth.

With the ability to play games anytime and anywhere on powerful smartphones and tablets running primarily Apple iOS or Google Android, the mobile game market is truly a scalable global business opportunity.

The explosive growth of the mobile games market can be partly attributed to an unexpected factor: the female player. Gaming is historically a male dominated market with action based games. But the modern female with disposable income, a smartphone and time on her hands has changed everything. This market development has opened the door wide for a previously niche category of games referred to as “casual” games. Candy Crush Saga is an example of a casual game, and clearly, this is no longer a niche category. 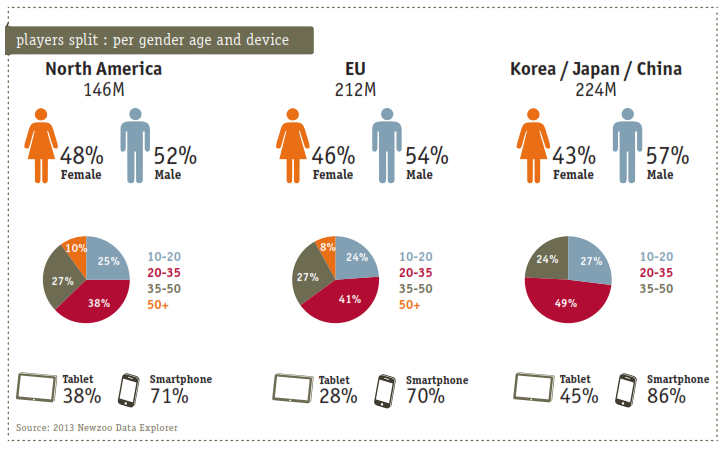 In targeting the global market for mobile games, Freeze Tag is highly focused on developing mobile social games that are casual, fun and engaging for all ages and gender. The free-to-play business model combined with our proprietary rapid game development engine allows us to systematically launch, optimize and monetize our games. We design our games to be never ending entertainment that our users will enjoy playing and be willing to pay us $0.99 from time-to-time for special features and virtual items to keep having fun. We believe that the free-to-play model should not be run as a sprint but rather as a marathon. Over the span of several months, or even years, each game is continuously subject to this optimization process to increase user enjoyment and financial return to the company.

Freeze Tag was founded by gaming industry veterans, and has launched several successful casual mobile games including the number one hit series Victorian Mysteries® and Unsolved Mystery Club®, as well as digital entertainment like Etch A Sketch®. Freeze Tag games have been downloaded millions of times from the Apple, Amazon and Google app stores.